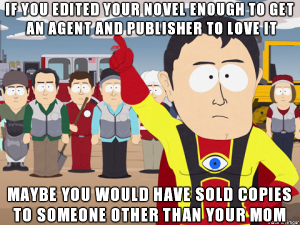 With every round of editing, it was clear that my MS was getting stronger and stronger. However, the feeling that the novel would never be perfect just does not go away. So, my current plan is to go for something “as close to perfect as possible, given a reasonable span of time and amount of effort” (don’t ask me how many years is too long, and how much effort is too much).

I’ve sent many, many queries, mostly in the last days of September and the first half of October of 2014. I’ve sent a negligible number of queries since then, in favor of waiting, editing, and researching as described below.

The appeal of going indie

For now, I’ll finish draft thirteen and send it to another beta reader. Then, I’ll consider hiring a professional developmental editor to have a look, assuming my esteemed beta readers’ feedback and my ability to scrutinize my own work isn’t quite enough. Finally, I’ll either send out that last batch of queries or start sprinting down that indie route (in that case, I’ll probably go with Lightning Source).