Coming back into the Eurozone after Scandinavia, the price of food and lodging seemed super-reasonable. My train out of Copenhagen brought me to Hamburg where I had some time before the next leg of my journey to Berlin; I spent that time at a Christmas market eating Christmas-y snacks (assuming you count deep-fried dough covered in Nutella as a Christmas snack). 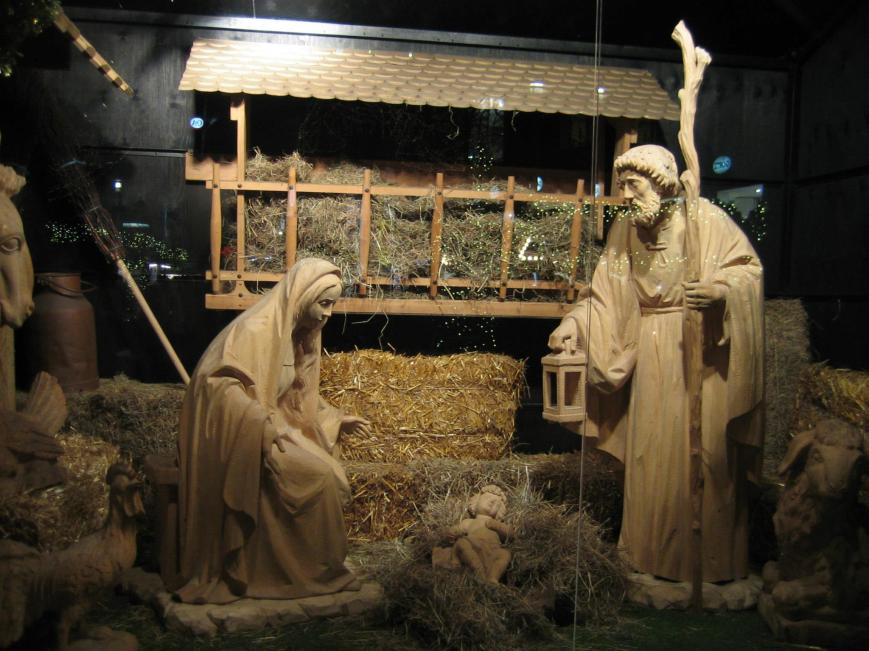 Arriving in Berlin in the middle of the night and too cheap for a cab, I walked from the Hauptbahnhof to the Heart of Gold Hostel. Little did I know, it was too late for check-in and no one would answer the frickin’ door.

Somehow, I wound up at the surprisingly cheap Meininger Hotel around the corner (I may have used the hostel’s Wi-Fi to look it up). After a shower, I ventured outside in search of nourishment. Being in the capital of Germany, I figured there’d be a bunch of late night places open.

I was wrong, at least with that particular neighborhood.

What Oranienburger Strasse lacked in food, it made up for with prostitutes. I had no idea I was in a sort of red light district for Berlin, nor did I learn that prostitution was legal in Berlin until after I’d left the country. Dodging woman after woman—many of whom were ridiculously good-looking, by the way—I eventually found a restaurant with an American 1960s diner theme. The place was aptly named, Sixties Diner. 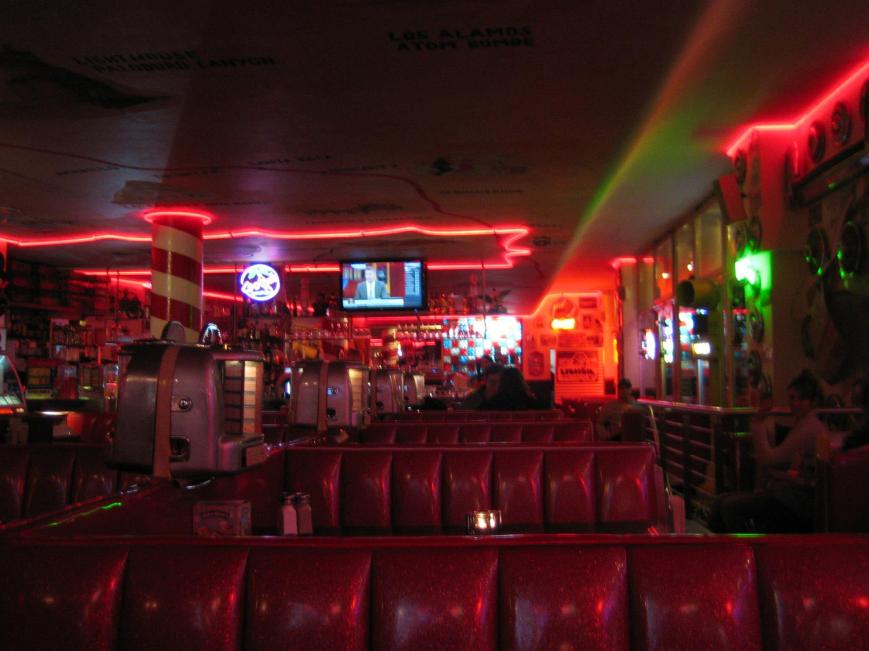 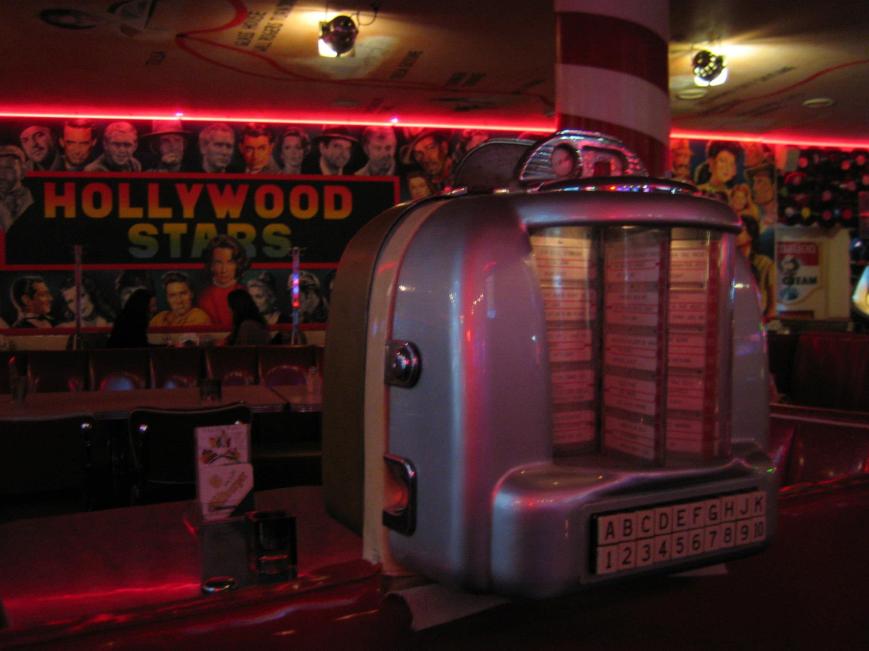 …except it’s kind of red-ish for some reason. Maybe because of the prostitutes outside.

The next day, I went on my first Sandeman’s Walking Tour. For those who don’t know (which, I assume are most of the random folks who might read this), Sandeman’s tours exist in a number of different major cities in Europe and they’re free. The guides, however, do ask for well-deserved tips (not being particularly well off, I tipped them 10 Euros). These guides seem to generally be young expats living in the city but are originally from elsewhere; they tend to be charismatic with a decent sense of humor, so the tours are entertaining (though I kind of wonder if all the stories they tell are true).

The Berlin tour started near Brandenburg Gate and brought us to a few places, including: Hotel Adlon (location of the late Michael Jackson’s baby-dangling incident); some government buildings (Deutscher Bundestag); the Memorial to the Murdered Jews of Europe; some spot that was supposedly over the bunker where Hitler killed himself; a former Nazi Airbase, remnants of the Berlin Wall and Checkpoint Charlie. Now, I’ll wrap up with photos of said places—

I was familiar with the Brandenburg Gate beforehand thanks to Civilization V (“playing… AND learning,” Ross Geller would be proud). 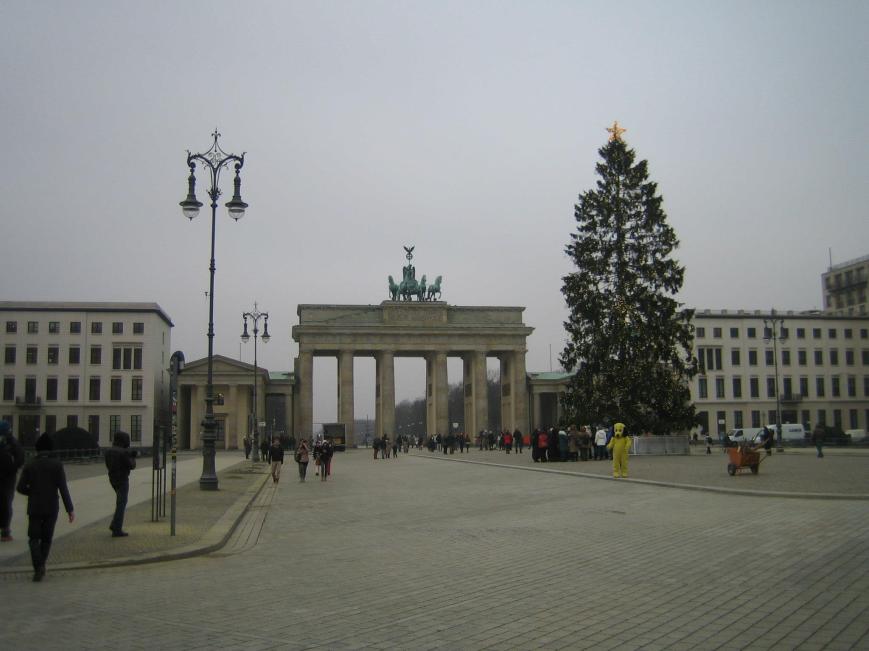 Another shot of the gate. 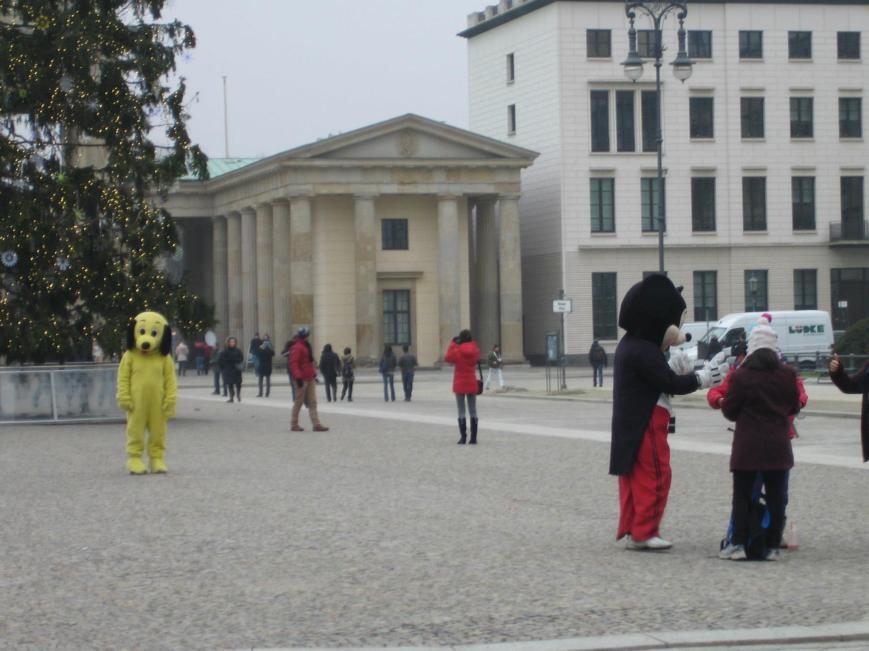 If I were a betting man, I’d wager that Mickey would-be Pluto aren’t officially licensed. 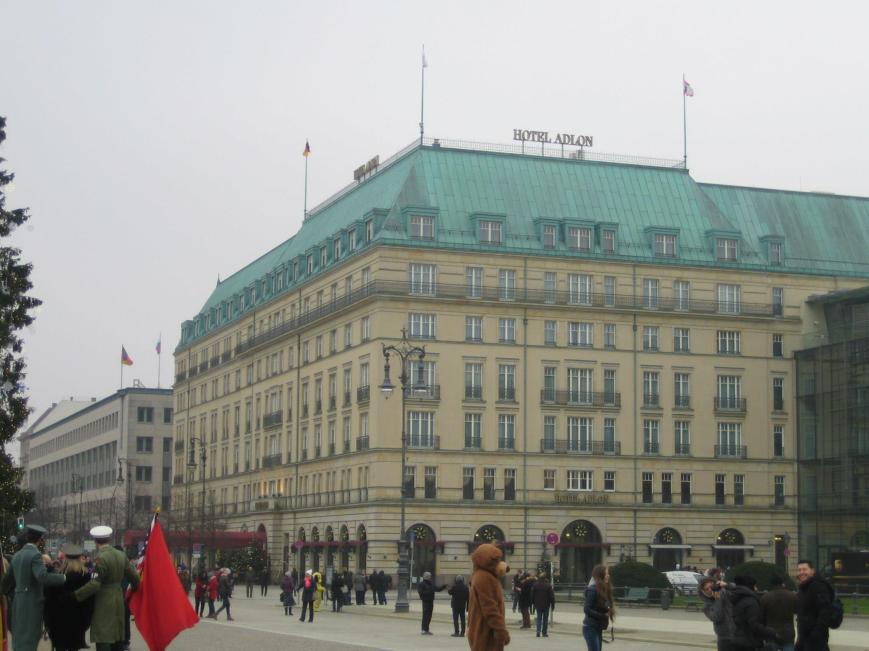 Totally trusting the tour guide who told me this is the Michael Jackson baby-dangling spot. Rest in Peace King of Pop.

Yeah, we didn’t bother getting closer to see the government buildings; I was probably one of the few people who cared (and it was only ’cause I’d just learned about this stuff in my comparative international law classes).

There are 2711 concrete slabs in the Holocaust Memorial.

Gets kind of labyrinth-like in there. 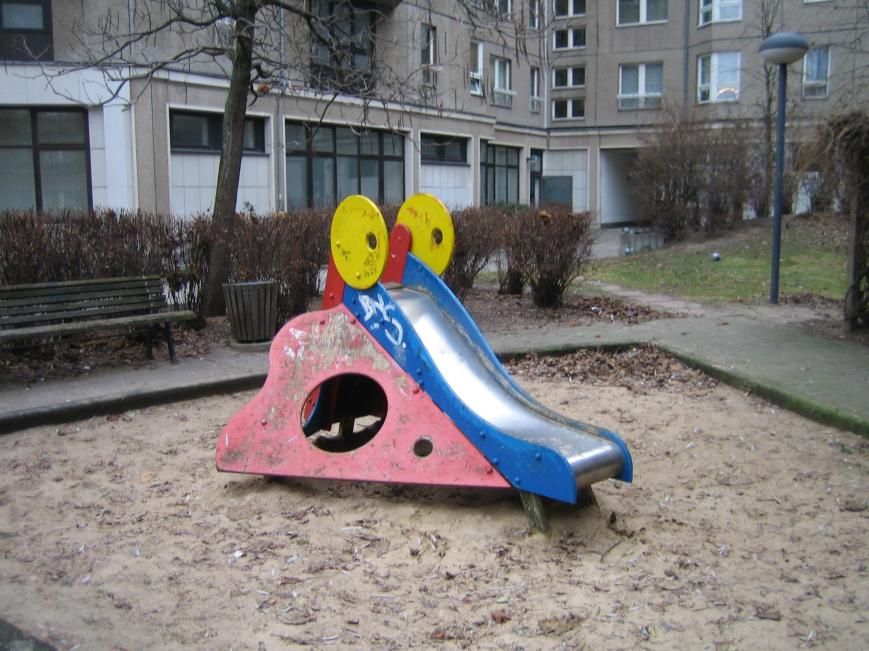 Again, I took my tour guide’s word that Hitler’s bunker was near here. 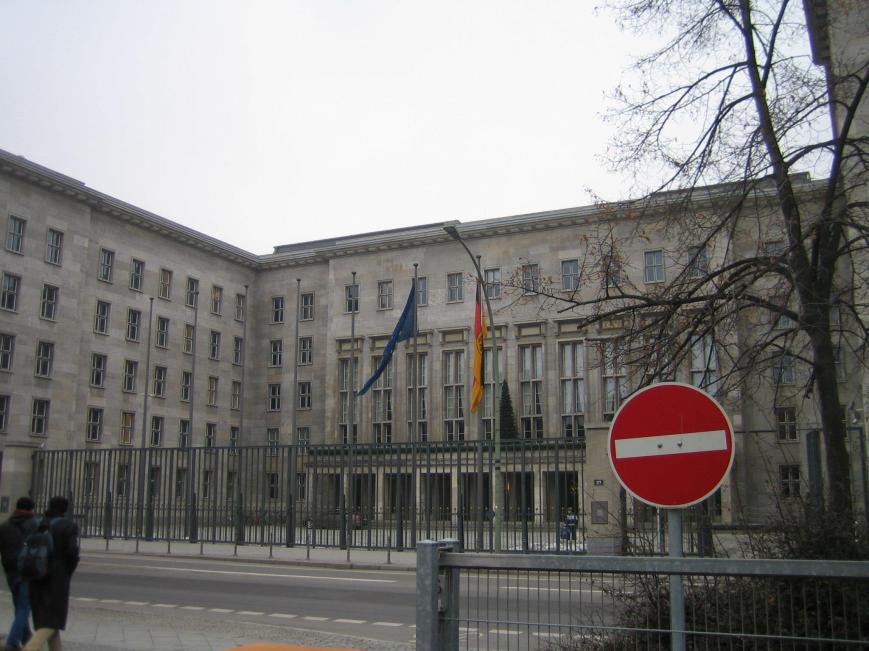 Supposedly a former airbase during WWII.

Some remnant of the Berlin Wall. 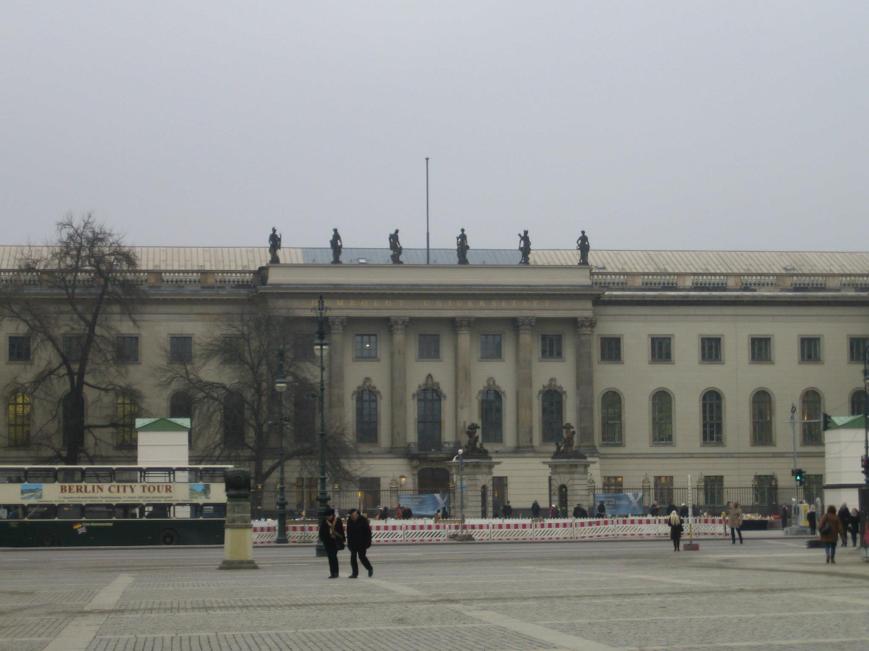 A statue of a weeping Mother Russia.

Some statue I thought was kind of cool. Now that I look at it, I should have taken the photo from an angle where that dude’s deal isn’t all up in our faces.

Berliner Dom; a cathedral, I think.