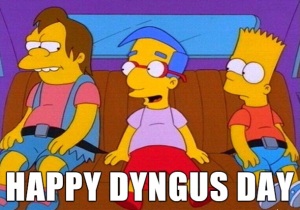 Like my crazy uncle used to say, there’s no better time than Dyngus Day to start posting again.

Dyngus Day is a Polish holiday celebrated on the Monday after Easter. I had no idea this holiday existed until a few days ago. If I recall my Wikipedia-research correctly, Dyngus Day is celebrated by boys throwing water at girls they like and proceeding to spank said girls with a pussy willow branch (girls do the same to the boys on Tuesday).  This sounds a lot like assault and battery to me, though, so you might want to consult a lawyer before you decide to become a Dyngus-participant.

Anyway, I’ve been pretty busy recently. Doing more attorney work, researching potential career paths, and spending time with the significant other and family—my schedule hasn’t been so packed since 2013. It’s been tough setting aside time for writing, and depending on where my career(s) take me, I might have to learn to better finagle my schedule to get some writing in (and more time to read other people’s blogs).

Despite being busy and whatnot, I’ve been slowly rewriting the horror/supernatural novel I wrote for NaNoWriMo 2015. I want to rewrite this entire supernatural project before I start another rewrite of my YA Sci-Fi (which may no longer be a YA by the time I’m done with it).