I watched Horns (2013) with absolutely no expectations. Somehow, I’d gone without hearing much about the film and didn’t bother checking others’ reviews. Overall, I was pleasantly surprised.

Coincidentally, I’d just watched Bruce Almighty (2003) before watching Horns, so there was a bit of a contrast between the two films: in one, God takes a rather direct hand in helping a protagonist figure out his problems, and in the other, He seemingly has delegated the job to Satan.

In Horns, Ig Perrish (Radcliffe) is suspected by nearly the entire town for the murder of his girlfriend (Juno Temple). Having been on a drunken bender at the time, he’s not quite sure himself whether he did it. Being treated like the devil incarnate, Ig eventually also looks the part when he sprouts horns on his head and finds people confessing their sinful desires to him because of it.

END_OF_DOCUMENT_TOKEN_TO_BE_REPLACED 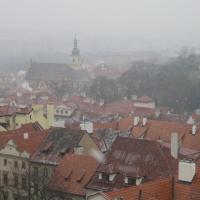